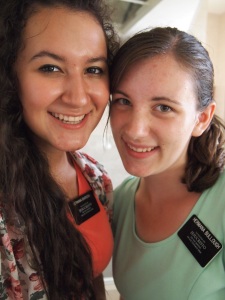 Sisters in the church can be great missionaries, but seriously, some people think that a young woman in the Church of Jesus Christ of Latter-day Saints is somehow less worthy to be a wife and mother unless she’s served a mission.

I saw this quote recently and almost lost my lunch:

Many young women are serving missions. Many are preparing to serve. Not because they aren’t married or have nothing to do, but because they have a desire to serve and are therefore called to the work. The reason so many are going is because in the next generation, Heavenly Father will be sending His priesthood army to earth and wants to send them to mothers who have been properly trained and taught in the gospel. What better training can a young woman have than a mission? – Guess who said it?

No LDS Church leader with authority to speak for the church has said this, but doesn’t it sure look nice all italicized and printed up on a bookmark?

This false quote is causing harm to many young women. While the first half of the statement is true, many young women DO serve missions because they feel strongly that they should, this so-called “quote” is the source for misjudging young women in the church who do not receive the inspiration that a mission is what Heavenly Father wants for them. It’s been mis-attributed mostly to President Gordon B. Hinkley, but also to President Ezra Taft Benson, as well as President Spencer W. Kimball, and I have an official source that says it’s NOT TRUE.

“This statement is without foundation and should not be perpetuated. If you have seen it (or anything similar to it), do not quote or pass it along. In relation to these types of statements, we remind all personnel of the counsel the First Presidency sent to priesthood leaders on May 13, 2004: “From time to time statements are circulated among members which are inaccurately attributed to the leaders of the Church. Many such statements distort current Church teachings and are often based on rumors and innuendos. They are never transmitted officially, but by word of mouth, e-mail, or other informal means. “We encourage members of the Church to never teach or pass on such statements without verifying that they are from approved Church sources.”

I’ve heard of young men these days who say that they will only marry a girl who’s a returned missionary, partly due to this false “quote”. So I’d like to raise my voice and quote President Dieter F. Uctdorf and say, “Stop it.”

Stop judging young women as somehow “less-than,” who have sincerely prayed to Heavenly Father about a mission and received the answer, “No, not now.” Or, “No, not this way.” Stop judging girls who are explicitly following the counsel of the current prophet, President Thomas S. Monson, when he said,

“We affirm that missionary work is a priesthood duty—and we encourage all young men who are worthy and who are physically able and mentally capable to respond to the call to serve. Many young women also serve, but they are not under the same mandate to serve as are the young men. We assure the young sisters of the Church, however, that they make a valuable contribution as missionaries, and we welcome their service.” – Pres. Monson (emphasis added)

Here’s my news flash: I am a mother of 5 children who have served, or are currently serving LDS missions, plus one son whose mission call is waiting for him to open it. I never served a formal mission and I rolled my eyes when someone would say to me, “Your mission is raising kids.” Thanks for your patronizing attempt to pacify any inferiority you may have just implied I have. I would think this, but not say it aloud, before I rushed to take care of the next child-related calamity. (FYI, you can’t get a quart of honey out of the carpet with a rental machine.) This is how I felt about that statement for the next 28 years, until recently, just before I said farewell to my last daughter to leave for her mission. I was walking home from church when the words randomly popped into my head, “You are serving the mission I called you on. I called you to raise missionaries.” This is called eating humble pie, served up by the Holy Spirit. The irony of this idea, to me, is that my focus as I raised my children was less on pushing them to “go on a mission,” which I was certainly supportive of, but rather more on being people who live a gospel-centered and service-oriented life every day, with an emphasis on being worthy to enter the temple, and doing those things that would enable them to create an eternal family.

So here’s the thing I’ve learned. As a mother, I HAVE been serving a mission all along, even though I haven’t been “on a mission.” And just like every mission, there have been some hard, hard things. I’ve had companion challenges, my “investigators” have hit me, spit on me, yelled at me, told me to go away, and even broken my personal belongings. I’ve also had the opportunity to love from the depths of my heart to the point of deep pain and glorious exaltation. I’ve seen them get baptized, struggled with helping them learn to appreciate the scriptures, and mourned with them when their choices brought them pain. It is not required to serve a formal mission to fully serve the Lord and raise a family up unto Him.

I counsel my children to do what Heavenly Father prompts them to do and to be respectful of others who receive different answers than theirs. This applies to everyone, whether or not they choose to serve a mission, to whomever they choose to marry, and to other people, whose prayers and answers are simply none of our business. Be kind, and remember that we are not all on the same place on the path back to Heavenly Father. Be kind, and have the courage to stand up for the answers you personally receive to your prayers, in spite of how it differs from all the “shoulds” everyone else throws at you. I encourage them to remember that life has a way of teaching us the things we need to learn, regardless of whether we learn it on a formal mission, or whether we learn it as we pursue a career, or whether we learn it as we build our own families – so when it comes to judging others, “Just stop it.”

“What better training can a young woman have than a mission?” How about a mother who teaches her daughters and sons to love God and their neighbors, and shows them that the Lord is faithful in all His promises. Because mission preparation is also marriage preparation, and career preparation too.

47 Now they never had fought, yet they did not fear death; and they did think more upon the liberty of their fathers than they did upon their lives; yea, they had been taught by their mothers, that if they did not doubt, God would deliver them.

48 And they rehearsed unto me the words of their mothers, saying: We do not doubt our mothers knew it.