Casi’s Question: How Do You Know Who Is the Prophet?

Please Note: I realize that this post will clash with the beliefs of many people. I hope that you can understand that I am not seeking to diminish or disrespect the various belief systems of others. I am only making an attempt, out of my own weakness of articulation, to express my family’s beliefs in order to broaden dialog among all people. Mainly though, I’m just telling you about our weekly experiences with Family Home Evening. You could have your own Family Night times where you teach your own children the principles and stories of your faith. Regardless of your religion, I strongly believe that if everyone did this the world would be a kinder, more beautiful place to live.

It’s been a school holiday weekend for us so we’ve been able to do a lot of family activities. For this post though, I’m just sticking with the Family Home Evening that we had last night. I’ll blog about the other fun stuff in separate posts. It will save you from a post that is forever long.

Miss Sassy leaves for her mission very early tomorrow morning, so last night was her last FHE with us for a while. Casi asked us a question a couple of weeks ago that we needed to answer for her, but didn’t have the time for it when she asked. Tonight was the time. The question was, “How do you know who the prophet is?”

I feel the need to give a quick refresher here. My family belongs to The Church of Jesus Christ of Latter-day Saints, aka “Mormons”. Casi is an exchange student from Germany living with us for the school year. She is not a member of our church. While she is here, she is not allowed to “make life-changing decisions”, including R-rated business with boys, and changing her religion. We all understand this and wholeheartedly agree. Given the situation though, it becomes necessary to do a lot of explaining. Mormons make great Americans, but not everything we do or believe is “typical” for many Americans, and so clarifying things as they come up is important throughout Casi’s time with our family.

And So, her question, “How do you know who the prophet is?”

Mr. Hot Stuff taught the lesson answering this question very well last night, in spite of my interjections that he felt were bunny trails leading away from the main topic. I’ll try to sum the lesson up in a nutshell.

It all started with Adam (as in Adam and Eve).

God spoke to Adam and taught him the things he and Eve needed to teach their children and grandchildren, and great-grandchildren, and so on. They lived a very long time, doing their part to multiply and replenish the earth. Adam was God’s first prophet and God gave to him the authority to perform certain ordinances and govern the Church in His name. Adam was also given the authority to ordain, or pass down the Priesthood of God other worthy man who would continue to teach and guide the Church as led by God. Adam ordained his son Seth to do this job, and so it went, down through the generations, until the day came when the people rebelled from what the prophets were teaching them. We call this a time of apostasy, when people refuse to follow God’s commandments.

This leads us to the days of Noah.

He preached repentance to all the people for 120+ years, and the Bible tells us how well that went over. The floods came and Noah’s family and children-in-laws were the only ones who got on that ark and everyone else was destroyed. Noah continued to teach his family and descendants for many years after that. A few of them didn’t agree with what he taught, so they left and formed their own religion(s), but the Priesthood of God continued to be passed down to worthy men (Abraham, Isaac, and Jacob, among others) who continued to talk with God and receive revelation in how to guide His Church on the Earth. Again, the time came when there was another apostasy. The prophets were all killed, and the Priesthood was not found on the earth.

These were always times of dark suffering when this happened, but when Heavenly Father saw that the time was right,

He restored His Church and Priesthood to a man named Moses.

We can read the Bible account of how Moses was called by God to lead the Children of Israel out of Egypt, received the 10 Commandments and restored God’s church to the earth. Moses ordained others with the Priesthood and they helped him and lead the Israelites to their promised land. Again, for many years, prophets dwelt among these people and taught them what God wanted them to know, but over time, people again stopped listening, and the prophets were driven out or killed. This apostasy again brought a time of dark suffering. 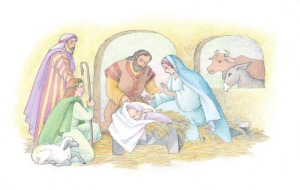 Then the wonderful day came when God sent his son, Jesus Christ, to live upon the earth.

Jesus Christ received his priesthood authority directly from his Father, God, who taught him and helped him to restore the Church upon the earth once again. Jesus ordained several other men, known as apostles, who were also prophets of God, who helped to teach the Word of God as Christ taught it to them. Following Christ’s death and resurrection, Peter was appointed by Christ to lead the Church as Jesus had established it. Peter talked with God also and was able to use the priesthood to bless the lives of many who followed after Christ. Sadly though, very soon after the Savior’s crucifixion, Peter and the other apostles who were prophets, were killed or disappeared (John the Beloved disappeared) and the world sank again into apostasy.

This dark and dangerous time lasted many years, until reformers such as Martin Luther, William Tyndale, and others sought to bring more of God’s light to the earth by efforts to reform the Catholic Church and teach directly from the Bible. The Catholic leadership at the time, didn’t particularly like what the reformers taught, so they kicked these men out of the Catholic Church. As a result many, many new churches were formed which promoted various ideas of how God’s gospel should be taught and applied in the lives of mankind.

Then one day, a boy named Joseph Smith was feeling sorely confused and feared for the salvation of his soul.

Not knowing which church to join in order to be saved, he read the Bible, searching for answers. In response to a Bible verse, James 1:5-6, which said in short, “If any of you lack wisdom, let him ask of God…” This was what Joseph determined he would do, so he went into a grove of trees and knelt down and said his first vocal prayer. As a result of that prayer, he saw God the Father, and His son, Jesus Christ. He asked them his question as to which church he should join, and was told not to join any of them, because, although they all taught much that was true and good, Heavenly Father would soon make a complete restoration of the fullness of the gospel to the earth as he had in times past. Roughly ten years later, God did just that, appointing Joseph Smith to be a prophet and the leader of the Church of Jesus Christ of Latter-day Saints. Other good and worthy men were also given the Priesthood of God and appointed to be apostles to teach and help lead the Church, while other worthy men were ordained to use the priesthood to bless their families and fellowmen.

This Priesthood of God has been passed down through the generations to our day, and the Church is now lead by our Prophet, President Thomas S. Monson, and his two counselors, along with twelve men who are ordained as apostles and prophets, just as Christ established in the early church.

Whew. It’s a long, windy explanation, but that was the rather big nutshell version of our FHE last night. I’m proud of you if you actually read through this far. I’m also really glad that we had this particular lesson last night, because Miss Sassy, our soon-to-be missionary, had never seen the whole priesthood-authority-through-time laid out like that, so now she has a better understanding of it herself and may be more able to answer that question when she gets asked by investigators.

Well, Mr. Hot Stuff and Jace decided to show Casi how to make Cake-in-a-Cup. The speedy go-to recipe baked in the microwave for a minute-and-a-half. I know I’ve posted this somewhere before, but I sure can’t find it now. It’s just my Crazy Cake recipe, downsized. Here it is:

Small cake in a cup recipe