The Beguiling of Eve – God’s plans are perfect, whether or not we are. 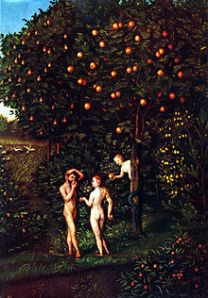 Note: While many of my posts are quite lighthearted, this one is a little more serious based on my personal understanding of the creation of the world and Eve’s decision as seen from my perspective as a member of the Church of Jesus Christ of Latter-day Saints. This perspective may limit how relevant my thoughts on this subject are to you. I just wanted to give you a friendly notice so you don’t waste your time wading through my logic, if it’s of no interest to you. Either way, have a great day, and enjoy the marvels of this wonderful world we live in.

This morning I read a blog post about The Creation and Eve,

regarding whether or not Eve was deceived when Satan beguiled her, and what that meant. Here is a little from the post, which I encourage you to go read in its entirety:

What Does it Mean that Eve was Beguiled?

What does that word mean?

For a long time I thought it only meant “tricked” or ” deceived” and it bothered me to think that Eve, a woman who was suppose to be one of God’s most valiant daughters, could be so easily duped.

I mean Moses wasn’t deceived or tricked by Satan when he tried to appear to him as a being of light (Moses 1:12-16) Why then would Eve have been any less skeptical of Satan’s claims?

According to Hebrew scholar  Dr. Nehama Aschenasy the word translated as ” beguiled” does not mean what we think it does…. (wonderful explanation in the blog article)

It completely changes our perspective on Eve if, instead of thinking of her being tricked into eating the fruit, we see her undergo an intense multilevel experience before choosing to partake…. (Really you should read the post – just be sure to come back here and finish reading this one as well.)

Eventually Eve chose to eat of the fruit, but not because she was deceived.

(Please read more here, it’s a very good explanation of the term ‘beguiled’ and makes some great points to broaden our understanding of Eve: http://www.womeninthescriptures.com/2013/08/what-does-it-mean-that-eve-was-beguiled.html#comment-form)

While there are many things I appreciate about this article, it seems to me that members of the LDS Church are often quick to profess that, “the Lord giveth no commandments unto the children of men, save he shall prepare a way for them that they may accomplish the thing which he commandeth them.” (1 Nephi 3:7)

So we believe, and we teach our children, it is possible to keep ALL of God’s commandments.

But I don’t think that’s how it works. While I can’t lay claim to keeping ALL of God’s commandments, ALL the time (I can’t yet even lay claim to wanting to keep all the commandments all the time, let alone doing them. Although I want to want to keep them all. If that makes any sense at all.), I still believe it’s possible. I believe Jesus did it, and I want to become like him.

By claiming that Adam and Eve couldn’t keep all of the commandments they were given, including the one to procreate, and the one to abstain from the particular fruit that would make them mortal,

we inadvertently claim that God is a deceiver himself,

giving Adam and Eve contradictory commandments, knowing that they couldn’t keep them both. By claiming they HAD to exercise their agency and choose to break one of the commandments, we create God in our own (mankind’s own) fickle image. We say that the only way Adam and Eve could exercise agency was by breaking a commandment, yet we expect our own children to exercise agency and trust in our wisdom and timing by choosing to obey the things we ask of them when we ask them. Adam and Eve had the same ability to exercise agency by choosing to obey. They had the ability, as do we, to take worries and concerns about being able to keep the commandments they were given to their Father in Heaven. He is a loving Father, and will answer the sincere prayers of His children. My guess is that, just as we as parents often judge our children’s readiness for new experiences by the kinds of questions our children ask us, Adam and Eve were also at a place in their learning where they were nearly ready for Heavenly Father to introduce to them the next step in their progression. All they needed was to ask some of their questions. I’m assuming that they both had questions. They were both tempted, but Eve for whatever reason, thought more deeply about the situation and worried about it more. However, instead of seeking God’s help and counsel, Eve particularly, but also Adam, chose to rely on the wisdom of the flesh, rather than waiting for further light and knowledge from God.

Yet another tangent of reasoning I’ve had about this is – by saying that it was impossible for Adam and Eve to keep ALL of God’s commandments, yet they were still required to suffer the sorrowful consequences of their (essentially forced) decision – we imply that NO ONE could have kept those commandments. Yet we are told that if we want to do what is right we should always seek to do what Jesus would do. Are we saying that Jesus Christ could not have kept those commandments had he been there? That being immortal in the Garden of Eden would have forced the Savior of the world into an impossible situation that would force him to transgress a commandment of God? Are we saying that God, himself, could not have kept his own commandments, or his perfect state? That is the winding and treacherous path that this logic leads us down.

Better to say that, in spite of all her best reasoning, worrying, pondering, and thought, Eve was deceived. She forgot to take her concerns and fears to God. She forgot to trust in God’s timing and she transgressed the law as a result. It’s best for us to remember that there is only one person who has lived a perfect life, and that is Jesus Christ, the one who has stepped in to save us from both our well-intentioned transgressions and our deliberate sins. God’s plan for us is perfect. His is the eternal Plan of Happiness. His Plan was perfect from before He ever created the heaven and the earth, or said, “Let there be light.” He had a perfect plan for Adam and Eve in the Garden of Eden, regardless of whether they exercised their agency to keep His commandments or do things their own way. No matter what, it was inevitable that they would mess up somehow, and in anticipation of those events, God provided a Savior.

It’s important to realize and accept that God’s timing is perfect and his understanding is complete. When we lose sight of that, we do things like eat fruit before it’s time, begin dating before we are appropriately ready, engage in sex outside the covenant of marriage, or commit suicide while in the depths of despair.

I’d be interested to hear your thoughts about this. Feel free to share them in the comments below.

Final note: These are my personal views only. I make no claim to speak for The Church of Jesus Christ of Latter-day Saints in whole or in part.