What Dreams Are Made of: Arrested, Orphans, and Airplanes. And a Dose of Happy

“To sleep: perchance to dream: ay, there’s the rub;” -Shakespeare from Hamlet

It’s no big secret that I don’t sleep well when Mr. Hot Stuff is gone. Something about having him in the bed next to me seems to tell my subconscious, “All’s right with the world, you can relax and sleep.” When he’s gone, sleep is long in coming and I wake easily to small sounds and I usually waken earlier in the morning. All that is normal when he’s gone. 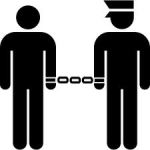 One night I dreamed that I was arrested while grocery shopping with Miss Sassy and Arctic Boy. I pulled into the parking spot and suddenly I was surrounded by three police cars, one unmarked, and had three guns pointing at me. The officers were yelling at us to get out of the car with our hands up. Then they came over to me and put hand-cuffs on me. I called to the kids to call Dad and Mrs. Whiffle-bird from church (she’s full of good sense and kindness and would know how to help them). I kept asking why I was being arrested, but no one would tell me. They just said I had to come with them. It was all very scary and distressing. I kept asking what was going to happen to my kids; no one would answer. I woke up with tears running down my face.

The next night I dreamed I was helping my friend, who is from India, to smuggle Chinese orphans out of China by train into India. We made it safely out, but got to India and realized that no one had made provision for the children to have a place to stay, so my very hospitable friend and his wife opened their home to them and fed them and offered safety. (Even as I write this I can smell the curry.) Somehow things got all worked out for the orphans in the end.

Last night I dreamed I was with my family at a big field near a hospital and a lake. There were supposed to be fireworks set to music that night and we were waiting for them to start. Suddenly from the public announcement system, came a voice saying, “Ladies and gentlemen, the show is about to begin!” Everyone cheered and clapped, and then, into our view in the sky came a passenger plane.  The announcer said, “From Amsterdam, Holland!” and the plane crashed into the water, exploding into bits. The jet fuel made it look like the water was on fire. Then the announcer said, “From Capetown, South Africa!” and another plane flew and crashed into the lake. “From Nairobi, Kenya!” Crash. Burning in the lake. “From San Fransisco, California!” This plane crashed into a large field about a block away. “From, Paris, France!” This plane crashed into a medical clinic on the other side of the hospital. We could feel a hot wind from the fires of the wreckages, people were running everywhere and screaming and it felt as though all the world was ending. I looked around me and realized that I could not see my family members. I joined the scrambling crowd to search for them. I tried to call them with my cell phone, only to realize I had somehow lost it. I found someone’s iphone laying in the grass and picked it up but I couldn’t remember any phone numbers to be able to call anyone. Someone came up to me and said, “Oh, thanks for finding my phone.” I gave it to them and they ran off. I just stood there befuddled by the confusion, wondering what to do now and how do I get back with my family? Then I woke up.

I need a dose of happy now.

I saw this from funnyden and had to laugh: