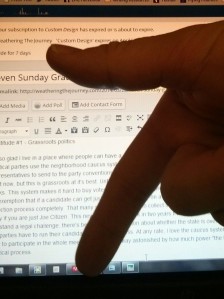 I’m so glad I live in a place where people can have a significant impact on choosing their political leaders. Here in Utah the political parties use the neighborhood caucus system where we meet as neighborhoods and choose neighborhood representatives to send to the party conventions to represent us with their vote. It more complicated than I really want to go into right now, but this is grassroots at it’s best. Unfortunately some of the big-money party leaders aren’t too happy with how that works. This system makes it hard to buy votes to get through the primary elections. As a result, they’ve managed to push through an exemption that if a candidate can get just 20,000 signatures on a petition then they can skip the neighborhood caucus selection process completely. That many signatures is easy to collect if you’ve got the money to advertise yourself, but not so easy if you are just Joe Citizen. This new exemption will kick in two years from now. We’ll see how well it goes, if it can even withstand a legal challenge; there’s been some speculation about whether the state is over-reaching it’s authority to dictate how the parties have to run their candidate selection process. At any rate, I love the caucus system we have. If you attend once and stay to participate in the whole meeting, you come away astonished by how much power “the little people” actually have in the political process.

Miss Electric is one of those people who grow extra wisdom teeth. She has managed to grow a total of six wisdom teeth. Our dentist was hopeful that they might grow in straight and she wouldn’t need to have them removed. No such luck. She had one become impacted while on her mission, resulting in an emergency tooth removal. Because she came home from her mission and jumped back into school so quickly, she didn’t get the remaining teeth removed immediately. Now another one has had to be removed on an emergency. This leave just four left, all of them upper molars, fun-fun. Guess what she gets to do over her spring break? I’m just so glad we don’t have to drag her to the local barber shop to have them taken care of. Instead she gets modern anesthesia, and speedy, trained, experienced dentists. Thank goodness. Add to that, there are offices that understand the challenges of not having dental insurance and don’t supercharge their bill because you are paying cash.

Seriously. How did the world ever survive without these things? I know it’s possible, but I used to have to carry around a fat planner with my schedule, contacts, and lists. It put a serious strain on the shoulder hauling it all around. Now it all fits easily in my pocket or purse because it’s all on one tiny device that also pulls up a map to the wedding I need to get to or locates a shop that sells specialty baking supplies.

These 5 to 18 minute gems of genius are so great. They give you a chance to learn something new everyday. Do I always agree with everything presented? Nope. Do they get the synapses firing? You betcha. It feels so good to actively exercise the brain everyday. This week was TEDxBYU. I read a friend’s notes on it and was inspired and educated just by them. Next year I hope to go to it myself, but the 2013 videos are up, so I can watch those in the meantime. Click here to watch them.

This is a good one from last year and one I really needed to hear right now:

This week I went to the wedding of Mr. Hot Stuff’s cousin. This man has not had life easy. Some of his challenges were just the lot in life that he was born into. Other challenges were ones that came as a result of life choices. Over the last year, we’ve watched this courageous man humble himself and change some of his choices. His faith in God has grown and his hope for a better life has been renewed. As a result of these changes, he met a lovely woman who has been waiting for someone just like the good man he’s become. I’m not a believer in a free ride to happily-ever-after. I believe that we have to work daily to create the ever-after that we most want. No one can wave a magic wand and had it to you. Relationships require attention, care, and feeding to maintain and keep them together. Fortunately, one of the best ways to do this is just to have fun together and laugh about unexpected events.

This is actually a movie title and statement rolled into one. The movie is about a young Christian college student who is placed into the position of either denying his faith or going head-to-head in a debate with his philosophy professor about whether or not God is real. His grade in the class is on the line, and his grades in his other classes are put at risk because of the amount of work he has to put into this philosophy class.

The more I think about the situation in this movie, the more I find myself thinking about my dad. All through school, when I struggled with my homework, he would help me learn it. Then he would turn the tables on me and say, “Now explain it to me.” I would get so frustrated when he did this. So often my understanding of the material was still so shaky, that this was very difficult for me to do. When he could see may anger mounting, he would say, “If you can’t explain it to someone else, you don’t really know it yourself.” Oh I hated when he would say that. I often felt that as long as I understood the order of the steps for solving a mathematical problem, then that was good enough. The times when I was actually pretty confident that I understood something and could explain it fairly well, he’d throw out another question, “Would you stake your grade on that answer?” This would trigger a completely new level of doubt for me. Did I really know this? Would I stake my grade on the answer? As much as I disliked him pushing me to new levels of understanding and certainty, I look back and see how his way of teaching made me who I am today. I tend to ask deeper layers of questions, and try to understand things well enough that I can explain them to others.

Watching this movie, God’s Not Dead, made me stop and think again. If I was asked to defend the existence of God, would I be ready? Would I be willing to stake my reputation on my ability to explain to others the existence of God? It’s a humbling thought. I’ve been in situations before where I’ve had to defend the rights of people to believe what they choose regarding religion and God. I think that if I had to defend the existence of God, I could do it, nevertheless, I also believe that people are free to choose for themselves, and while I am willing to share what I believe, I would have difficulty with an assignment to “prove it.” There always will remain the truth that “A man convinced against his will, is of the same opinion still.” At any rate, I think it’s valuable to have done the work necessary to know for myself and be able to explain to another person what i believe and why. The coolest thing is, I realize I’ve spent most of my life teaching and explaining my beliefs to others who wanted or needed to know for themselves, and my dad (and mom) have done it also. Who knew that math homework would build my faith? Thanks, Dad.

This one is kind of a cheat, because I’ve been up since 3:30 a.m. and it’s nearly midnight now. But my body needs sleep, and I’m choosing to be grateful that I can.